Are you crazy? So what's all this Diplo stuff then, eh?

Whilst at University I played a few impromptu gigs with a couple of girls I knew. I wrote some silly songs and played guitar, and they provided backing vocals and provided the audience with something more aesthetically pleasing than myself. With me, through the good gigs and the bad, where my two model Diplodocuses, acting as mascots and keeping me safe from any stray bottles. Hence, the girls christened me Danny Diplo. Obvious really! I just stuck with the name as it was suitably silly :) 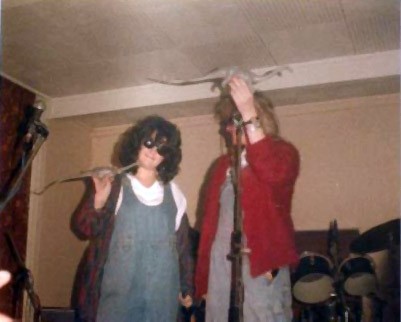 Even to this day, I use the name Danny Diplo or Dan Diplo when I'm playing online games on the net. I also often go by the name Diplo when making my music and posting on various dodgy internet forums. And, as previously mentioned, I'm nothing to do with that DJ Diplo chappy in the U.S. who seems to have cheekily used the same moniker. Humph!

So, if you've come here thinking I'm some kind of celebrity, well sorry, but I'm not. However, I'm always available to launch ships and open shopping centres, if you want to pay me lots of money to do so. Please contact me if you wish to give me large wads of cash. Thanks! But if you are interested in music then why not check out my tips on music production or listen to some of my tracks? It would be rude not to. 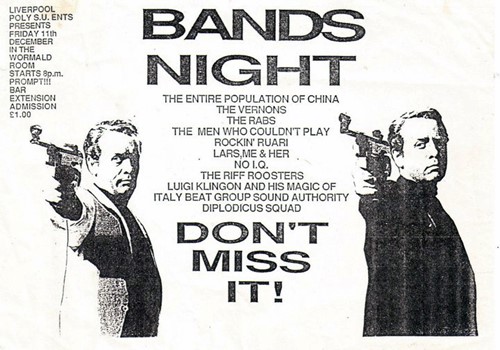 (Above) A poster for bands night at Liverpool Poly C.F.Mott Campus (now John Moores University) where we were bottom of the bill and the name was dubiously misspelled. Incidentally, the drummer in Luigi Klingon (just ahead of us on the bill), Phil Selway, went on to find fame with a certain band you may have heard of called Radiohead.

A rare shot of Diplodocus Squad's one and only gig, featuring me on guitar and Andrea and Sam on vocals.

Listen to my music tracks

If you want to get in touch, head this way...